EBTC is one of the Development Partners of the Clean India Mission Urban (Swachh Bharat Mission – SBM) and can thereby enable the identification and co-creation of (pilot) projects in the space of waste management and waste to energy by means of targeted project advisory and, if suitable, cluster models.

SBM was launched in 2014 by the Government of India. Its objectives are to augment the availability of sanitation facilities, reduce the amount of household and other waste in the public domain, and raise awareness of the importance of good practices. Considering India’s manifold challenges in the realm of waste management, sanitation, and hygiene, the Clean India Mission is divided into Urban and Rural.EBTC’ s involvement is with regard to the Clean India Mission Urban (Ministry of Housing and Urban Affairs).

According to the 2011 census, India’s urban population is 377 million, or 31% of the total population. These numbers are expected to increase to 600 million by 2031. The census also showed that in more than 4000 statutory towns, close to eight million households do not have access to toilets and defecate in the open. Weak sanitation has significant health costs and untreated sewage from the cities is the single biggest source of water resources pollution in India. This indicates both the scale of the challenge ahead for the Indian cities and the huge costs incurred from not addressing them. To those challenges can be added the need to completely close all landfills and create the required infrastructure for the solid waste management and safe drinking water schemes.

The Swachh Bharat Mission aims to be accomplished by 2019, when India celebrates the 150th birth anniversary of the Father of the Nation, Mahatma Gandhi, who was a great exponent of sanitation and hygiene. Given the enormous scope in this area, EBTC will continue working with public and private entities in those domains to continue enabling bilateral co-creations that can help tackle  those challenges. 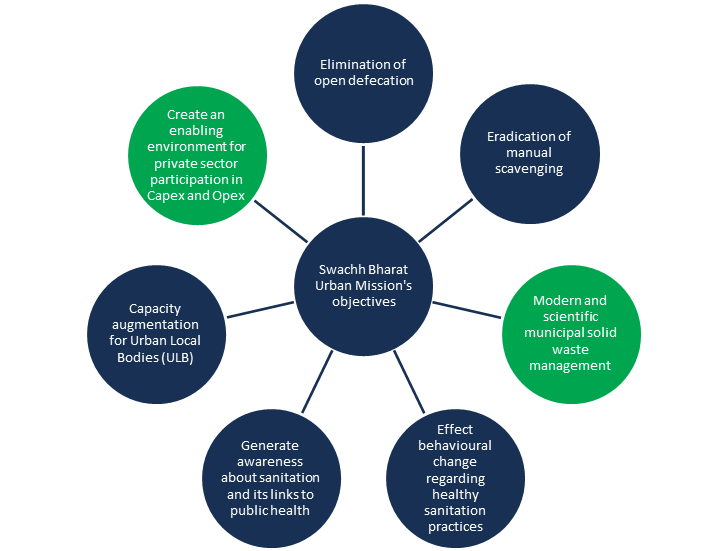 EBTC focuses on the objectives marked in green.